Retrospect Backup’s goal is to protect your entire environment as quickly as possible in as little storage as possible. The core engine uses forever-incremental file-based backup technology to protect individual files and folders as well as full systems. Forever-incremental backup allows you to only back up file and system changes since the previous backup, minimizing backup time and storage costs. PDF version also available.

Retrospect is file-based backup software, as opposed to drive imaging software that copies blocks or sectors on a hard disk drive. While an image- or block-based tool can be very fast at recovering an entire disk partition or providing a point-in-time view into a partition’s contents, a file-based backup provides several distinct advantages. For example, it’s possible to quickly search multiple backup archives and recover multiple versions of a document, while still being able to provide a complete restore of an entire disk. It’s also easy to restore files backed up from a Windows PC’s NTFS volume to a Mac, because the volume format doesn’t matter for file-based recovery.

Retrospect employs several technologies to ensure that it only and always backs up the minimum number of files necessary to restore whatever volume it is protecting.

Retrospect doesn’t use the traditional concepts of full, incremental, and differential backups.

These are outdated modes of backup that have significant drawbacks regarding performance and restore precision. Traditional full backups are incredibly time consuming but offer precise restores. Incremental backups save time during the backup process, yet they restore unwanted files that were renamed, moved, or deleted since the last full backup. 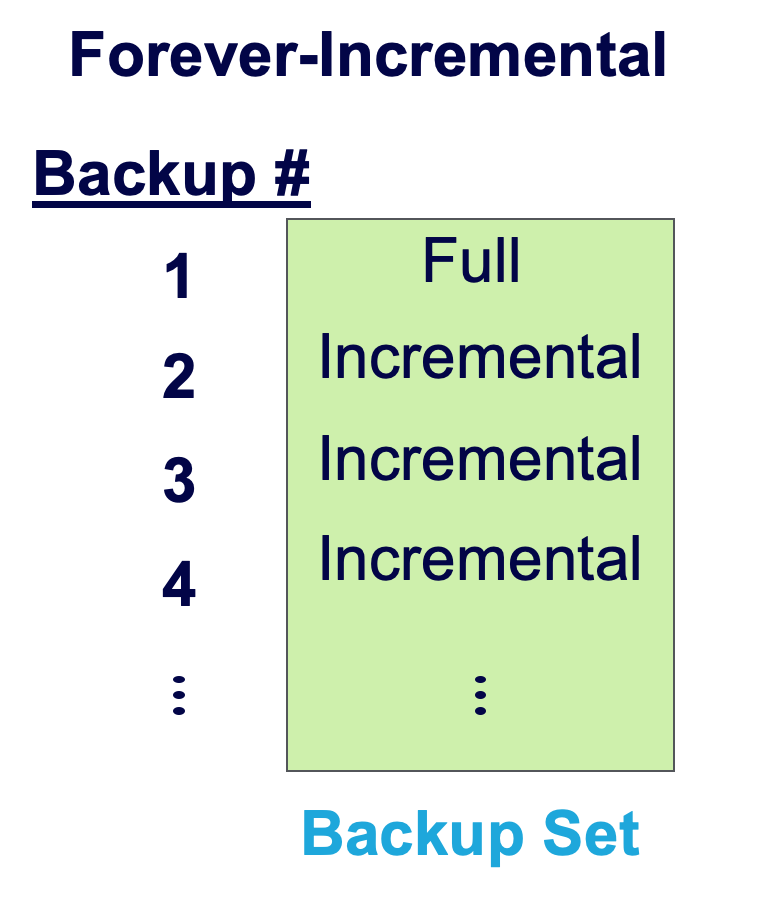 Retrospect’s Forever-Incremental Backup Technology works by matching the files on a source volume with the files that are already stored on the destination Backup Set. By doing so, Retrospect only needs to back up those files that have changed or been newly created since files were last written to the destination.

What makes a forever-incremental backup different from a normal incremental backup is the availability of data. The backup server stores the data of all the backup sets on the preferred media set (disk/cloud/tape). It automates the restoration process so that you don’t have to figure out which backup sets need to be restored. In essence, the process of restoring the incremental data becomes completely transparent and mimics the process of restoring a full backup.

In addition to copying just the files not already present on the destination, the Forever-Incremental process saves a complete listing of all the files and folders that were present on the source at the time of the backup. This provides a point-in-time snapshot of the exact state of a volume, which Retrospect can later use as a guide to select the proper files for a restore.

Retrospect uses the term Snapshot to describe a list of all files, folders, and settings on a computer at a point in time when a backup occurred. Each time a backup is performed, another Snapshot is added to the Backup Set. Each Snapshot represents a restore point, which is a point in time for which a restore can be performed for each source. This is the definition of the term Snapshot that is used when performing transfers of backup data from one Backup Set to another. 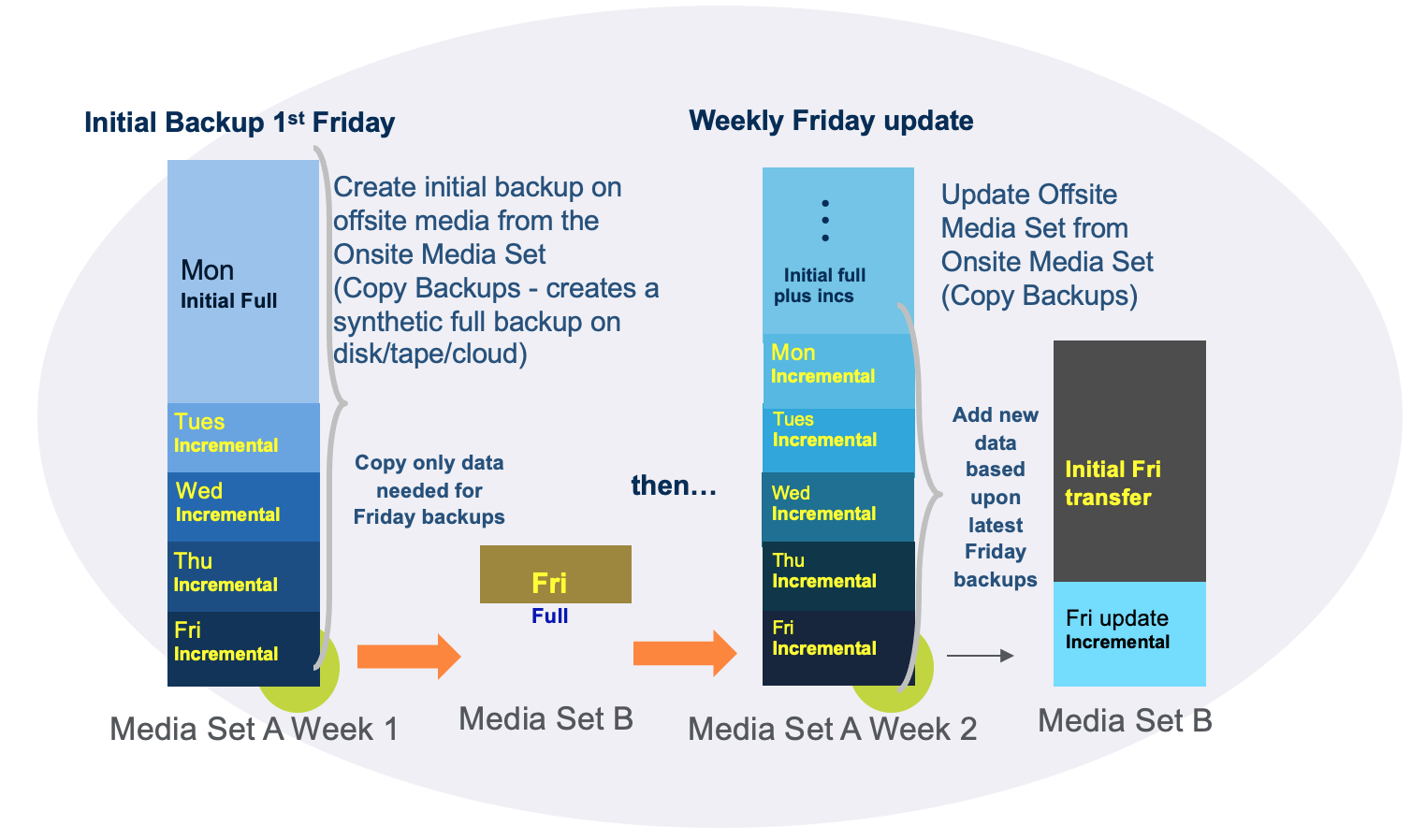 Because Retrospect only backs up files that aren’t already contained in the target Backup Set, it doesn’t store multiple copies of files that are duplicated around the network. For example, if Retrospect encounters a PowerPoint presentation on Computer B that’s exactly the same (in terms of name, size, creation and modification dates, etc.) as one it just backed up from Computer A, it doesn’t need to copy that file again. Likewise, if Computer A and Computer B share most of the same 60 GB iTunes music library, Retrospect only needs to copy the matching files one time. The more data that is duplicated around a network, the more time and storage space Retrospect saves.

Retrospect allows the user to create selectors that can be used to filter unimportant files, or to specifically select files that meet certain criteria. Several rules come pre-defined, such as the “All Files Except Cache Files” rule, which tells Retrospect to ignore temporary cache files like those created by Web browsers. Not backing up such files can save significant storage space, since it’s typically unnecessary to restore them. Businesses need to be able to include or exclude files based on how critical they are to the business. Music and movies can be excluded while preserving the ability to perform a bare-metal recovery.

Selectors are flexible and powerful. They can be used to prevent operating system files from being backed up, or to restore all Microsoft Excel files larger than 2 MB, which were modified in the past 60 days, and contain the word “Forecast” in their names.

Retrospect’s modular design allows the Forever-Incremental technology to be used in reverse during a restore operation for a restore process focused on your data, part of Retrospect’s customer-centric approach to data protection.

By using the snapshot saved with the backup as a guide, Retrospect ensures that only those files not already on the volume being restored need to be written, while (depending on the restore options selected) files that don’t belong are deleted. This gives Retrospect the restore precision of a traditional full backup, only Retrospect doesn’t have to unnecessarily re-copy matching files that are already present on the destination. Retrospect offers three types of restores:

These options cover a multitude of cases and provide incredible restore flexibility.